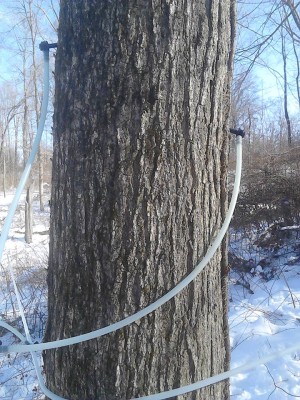 Half way through January I posted that sap season was coming soon.  I had no idea that we would start a lot later this year.  We just put our first taps in the trees today!  Hopefully we will still have a decent season with many sap runs.  I continue to be amazed at the process of making maple syrup.  Nothing is added to the sap after it comes out of the tree.  The boiling down process removes the water by turning it into steam.  The sugar content goes from around 2% all the way up to 67%.  There have been several studies done on the medicinal values of this God made sugar. The University of Rhode Island found that there are 54 potentially medicinal compounds found in pure maple syrup.  inflammatory agents. Initial studies also suggest that maple compounds may inhibit enzymes relevant in Type 2 diabetes management.  Everyone should add this champion food to their diet